Job satisfaction has been an interesting subject for managers and academicians for many years. It influences the efficiency of employees thereby it determines the effectiveness of organizations. Interestingly, it is an intangible and qualitative variable. It relates to feelings, emotions and expressions. Thus, it is a psychological aspect of expression of an attitude. Attitude is a permanent impression formed about the job. Employees interact with people and other resources while on the job. In the process, they experience positive or negative feelings on various aspects of structure and environment of the job and this feeling is called job satisfaction. The concept of job satisfaction has gained importance ever since the human relations approach became popular. When a person is considered as important in the organization, his satisfaction on the job is all the more important to direct the energy for the realization of goals1. 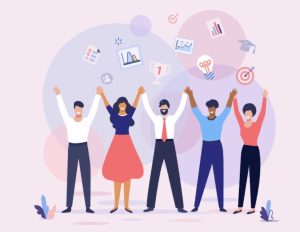 Job satisfaction is intangible and multi-variable. A number of factors influence the job satisfaction of employees. They can be classified into three categories. They are organizational factors, group factors and individual factors3. In this regard, a brief discussion is made hereunder.

a) WAGES: Wages play an important role in influencing job satisfaction. This is because of two reasons. The first one is that money is an important instrument in fulfilling one’s needs. The second one is that employees often see pay as a reflection of management’s concern for them. There is no denying the fact that employees want a pay system which is simple, fair and in line with their expectations. When pay is seen as fair, based on job demands, individual skill level, and community pay standards, satisfaction is likely to result. Often the definition of fair and equitable wage does not exist. So, wages are not perceived as equal to the labor exerted by employees. This leads to dissatisfaction among employees. Hence, emphasis should be laid on ones perception of fairness rather than the absolute amount paid to employees4.

b) NATURE OF WORK: The nature of one’s work has a significant impact on job satisfaction. Jobs involving the use of intelligence, skills and abilities, and which are challenging and have scope for greater freedom lead to job satisfaction. On the other hand, feelings of boredom, frustration and failure, and a poor variety of tasks leads to job dissatisfaction.

c) WORKING CONDITIONS: Good working conditions are needed to motivate employees to spend the required time at the work place. Safety and comfort motivate an employee to work. Poor working conditions may lead to a feeling that one’s health is in danger. Thus working conditions determine the level of an employee’s job satisfaction. For instance, employees in a software company express job satisfaction on this variable as they work in a very neat and comfortable airconditioned rooms. But a worker who is working in mines is likely to express dissatisfaction with respect to working conditions. This is because, there are a number of possible dangers to life like paucity of oxygen, roof falls, untidy and slippery floor, poor lighting and ventilation. Hence, the expression of feeling of satisfaction depends on the work environment of organizations.

d) OPPORTUNITIES FOR PROMOTION: Promotional opportunities affect job satisfaction considerably. The desire for promotion is generally strong among employees as it involves change in the job content, pay, responsibility, independence, status and the like. An average employee in a typical government organization can get three or four promotions in his entire life, though chances of promotion are better in private sector. It is no surprise that employees take promotion as the ultimate achievement in their career and when it is realized, they feel extremely satisfied5.

e) JOB CONTENT: Job content refers to factors that are inherent in the job such as recognition, responsibility, advancement, achievement etc. Jobs involving a variety of tasks and which are less repetitive result in greater job satisfaction. A job whose content is poor produces job dissatisfaction. Herzberg, Mausner and Snyderman found that job content factors like achievement, responsibility etc., lead to greater job satisfaction. In a study conducted by Walker and Guest, it was found that repetitive work is the most dissatisfying factor, whereas pay and security are satisfying factors.

f) LEVEL OF EMPLOYMENT: The level at which an employee is working determines job satisfaction. Jobs at a higher level are viewed as prestigious and employees working in such jobs express a greater degree of job satisfaction than those working at a lower level. Glimmer found that professional people have greater job satisfaction than salaried workers and factory workers are least satisfied with their jobs. Porter’s results were similar who found that at each successive lower level, managers were less satisfied6.

Group factors such as size of the group and supervision wield considerable influence on the job satisfaction level of employees. In this regard, a brief discussion is made here under.

a) WORK GROUPS AND SIZE: Existence of groups in organizations is a common phenomenon. It is natural for human beings to associate with others. This characteristic results in the formulation of work groups at the work place. Isolated workers dislike their jobs. The work group exerts a tremendous influence on the satisfaction of employees at the place of work. The satisfaction, an individual derives from his association with the group depends largely on his relationship with other group members, group dynamics, group cohesiveness and his own need for affiliation. Sales people working in different areas and meet once in a fortnight expressed greater dissatisfaction on the aspect of group process. Contrary to this, persons working in an office expressed greater satisfaction as they were allowed to interact frequently. Employees working in cabin culture offices expressed greater dissatisfaction than employees working in a front end office as a team. Further, group factors such as size of the group and supervision wield considerable influence on satisfaction. It is true to say that larger the size of the group, lower the level of satisfaction. This is because, as size increases, opportunities for participation and social interaction decrease, so also the ability of members to identify with the groups performance. It is a fact that more numbers mean dissension, conflict and groups within groups. All these do not augur well for the satisfaction of members.

b) SUPERVISION: Perceived quality of supervision is another determinant of job satisfaction. Satisfaction tends to be high when people believe that their supervisors are more competent, have their best interests in mind and treat them with respect and dignity. Communication is another aspect of supervision. Satisfaction of employees tends to be high when they are able to communicate easily with their supervisor7.

In addition to organizational factors, there are certain personal/individual variables that have a bearing on job satisfaction. In this regard, a brief discussion is made here under.

a) PERSONALITY: Factors such as perception, attitude and learning determine psychological conditions which in turn determine the personality of an individual. Therefore, these factors determine the satisfaction of individuals. An employee possessing a negative attitude about his job becomes disinterested in it. He is likely to express job dissatisfaction. An employee possessing limited knowledge of the job or poor learning capability is not likely to perceive his job as interesting. Thus, one’s personality determines whether a person is satisfied or dissatisfied with his job8.

b) AGE: Age is a significant determinant of job satisfaction. Younger employees possessing higher energy levels are likely to feel more satisfied. As employees grow older aspiration levels increase. Unable to fulfill these aspirations, they feel dissatisfied. The relationship between the age of employees and job satisfaction is complex and fascinating. According to Hammer and Organ, people start a job with unrealistic assumptions about what they are going to derive from it. Over time, they realize that reality falls far short of their perceived expectations and become disillusioned. They start to develop more realistic expectations about their job, and evaluate it in a more positive perspective. This positive evaluation produces higher job satisfaction. Thus older workers can also be more satisfied workers.

c) EDUCATION: Education provides an opportunity to develop one’s personality. It enhances individual wisdom, visualization, judgment, understanding and common sense. Highly educated employees possess persistence, rationality, and thinking power. They can understand a situation and appraise it positively. Thus, they are likely to express satisfaction with their jobs. However, employees with a higher level of education have higher expectations from their jobs. Dissatisfaction will be greater when educated persons are employed in lower level jobs. A poorly educated employee who cannot appraise the situation positively is likely to express job dissatisfaction.

d) GENDER DIFFERENCES: The gender and race of an employee also influence job satisfaction. Women are more likely to be satisfied than their male counterparts even if they have small jobs. This is because, women have lower levels of aspirations. Charies N. Weanch found that there is no significant difference in job satisfaction when males and females were equally affected by such determinants of job satisfaction as wages, prestige and supervisory positions. For instance, a women placed in a prestigious position derives the same satisfaction, as does a man in a comparable position. Barrack stated that generally females are dissatisfied than males because they have less job and pay opportunities than males9.

Besides the above, certain other factors that determine job satisfaction are learning, multiple skills, autonomy, job characteristics, unbiased attitude of the management, social status etc. Managers should consider all these factors in assessing the satisfaction of employees and increasing their level of job satisfaction.