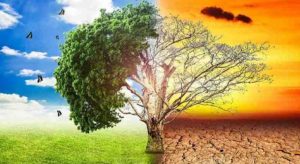 The increase in the earth’s average surface temperature is known as Global warming. It is mainly caused by the ‘Green House Effect’. The earth receives all types of energies including heat energy by way of radiation from the sun. Most of the heat energy received by the earth is radiated back. The residual part that is absorbed by the earth’s surface and its atmosphere make the earth habitable for living beings. The irrational burning of fossil fuels, mainly petroleum and coal, produces a disproportionate amount of carbon dioxide that (along with other Green House Gases or GHGs) forms a convex cloud-cover at the stratosphere of the earth. The outer cover of the cloud being convex to the earth allows heat waves from the sun to come into the earth, but while it is radiated back from the earth it is prevented by the cloud-cover (concave to the earth) and the heat waves are again radiated back to the earth. Earth’s surface and its atmosphere absorb the heat and thereby get warmer. This warming is called global warming. GHG is a group of six major gases having different Global Warming Potential (GWP); acting together or separately they cause the greenhouse effect. Table No. 1.1 (given in Appendix 1) shows the composition of GHGs with their corresponding GWP and atmospheric life. It is observed that GHG is comprised of carbon dioxide (CO2), Nitrous Oxide (N20), Methane (CH4), Perfluorocarbons (PFCs), Hydrofluorocarbons (HFCs), and Sulphur Hexafluoride (SF6). Fossil fuels are the primary energy source for human beings. The combustion of fossil fuels results in the emission of large amounts of CO2. A large amount of emissions of non-CO2 greenhouse gases also occurs in agricultural operations and production operations for fertilizer, aluminum, magnesium, etc. Though GWP of carbon dioxide is lower than other GHGs, carbon dioxide (CO2) is classified as the most significant GHG (IPCC, 2007) because of the presence of the CO2 in the atmosphere in much higher proportion than the other GHGs; total GWP from CO2 is thus higher than other GHGs. Therefore, it is important to target CO2 emission reduction in the atmosphere first to fight against global warming. So, for freezing first and then reducing global warming it is important to tackle the quantity of emission of CO2 in the atmosphere by taking or developing appropriate tools and strategies. These strategies are to be taken not only at the national level but also at the international level.CO2 generates from energy use. So, for reducing CO2 from the atmosphere it is important to reduce the energy use from all sectors consuming energy. But energy is the key factor in the growth and development of modern society and also of all types of industries. So the strategy for reduction of energy use should be implemented through optimum utilization of energy. As per International Energy Statistics (World Energy Outlook,2006) reproduced in Table no. 1.2 regarding global per capita energy consumption, Canada occupies the first position (17179 kwh), followed by the USA (13338kwh), Australia (11126kwh); India (631 kwh) is placed in the loth position i.e., far below the per capita consumption in developed countries.

Global warming is a situation of increasing average temperature of earth surface due to, inter alia, the over-existence of GHGs in the atmosphere. This situation is doing harm to almost all the living and non-living elements on the earth. And most of the evil effects are irreversible in nature. Evidence shows that most of the warming (of 0.1°C per decade) has been observed over the last 50 years and this is mostly attributable to irrational human activities. The Intergovernmental Panel on Climate Change (IPCC, 1996) projects that the global mean temperature may increase between 1.4 and 5.8 degrees Celsius (C) by 2100. This unprecedented increase is expected to have severe impacts on the global ecosystems, sea-level rise, crop production, and related processes. The impact would be particularly severe in the tropical areas which mainly consist of developing countries including India. Following are some evil effects of Global warming as summarized by different authors:

2) It will result in unpredictable and reduced rainfall which will lead to a decline in crop yields and lead to an acute shortage of water particularly in Africa.

3) Rising sea levels could leave 200 million people permanently displaced especially in heavily populated coastal lands as diverse as Bangladesh on the one hand and counties such as the Netherlands on the other.

4) Up to 40% of species could face extinction resulting in unprecedented biodiversity reduction and potentially upsetting the delicate balance in many ecosystems.

5) Both the number and the intensity of extreme weather phenomena, such as floods, droughts, hurricanes, and storms that trigger natural disasters are likely to increase significantly in most parts of the world.

Importance and advantages of dairy farming