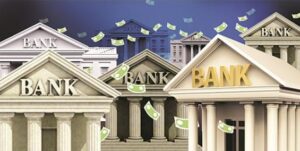 The question would be funny, to keep and get money How and Where ….” These words indicate the importance of bank. The banking system plays an important role in the growth of the economy. The banking sector is the lifeline of any modem economy. It is one of the important pillars of the financial system, which plays a vital role in the success or failure of an economy. It is a well-known fact that banks are one of the oldest financial intermediaries in the financial system. They play a crucial role in the mobilization of deposits from the disbursement of credit to various sectors of the economy. In this way, banks have control over a major part of the supply of money in circulation and they can influence the nature and character of production in the country. Therefore banks are the mainstay of the economic development of a country and the banking system acts as a mirror and reflects the economic health of the country. The strength of the economy of any country basically hinges on the strength and efficiency of its financial system, which in turn depends on a sound and solvent banking system.1

The contribution of the banking sector in the process of economic development can be summarized as under:

Role of Banking system in the process of economic Development