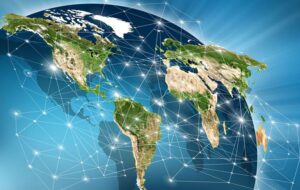 Globalization in the present day with its present process of spread and activities is an issue of controversy. To many global leaders advocating the spread of globalization, the recent trend and practice of globalization does not appear to be as desired. Such leaders feel that present features and characteristics of globalization in several situations are moving towards a direction that will lead to a disastrous consequence depriving humanity fully of the benefits which are expected from the process of globalization. In many parts of the world the deprived groups of people have been more dispossessed of the output of their labour, expertise, intellectual and physical abilities, etc. These groups of people in the new situation and atmosphere of globalization were made to give their above abilities for global purpose and instead the output of the contribution of these underprivileged persons had been utilized by the privileged groups for their self-interest and the underprivileged groups did not get a fair return in exchange of that. The mechanism and machineries of exploitation had been seen to be a regular ongoing system there under the name of globalization. The incidences of prolonged and established miseries, deprivation, and exploitation of people migrating to different countries of the world for working with their physical abilities or labour as well as intellectual labour, which may be termed as brain drain, by the way of being treated as inferior grade people instead of their abilities being at par with the people of the country where these people migrate is an illustration of the ill effect of the process of globalization. This practice is a common global phenomenon in the present day.

Situations are also not rare where products manufactured and marketed in countries having low human resource turnover are used to satisfy the interests of large global multinational and transnational companies eliminating and exploiting the due interest of the organizations and their people. The giant global organizations use the scope of globalization with respect to the poor economy of underdeveloped or developing countries to economically or financially deprive the manufacturing organizations and their employees of being located in these poorly developed countries. These situations make the big multinational and transnational companies bigger and the poor underdeveloped countries lose their fair share of return of their labour and other resources and also the economy.

In this respect, a brief concept of value and ethics as necessary for this process will be worthy of mention.

Types and importance of employee engagement

Difference between SHRM and Traditional HRM