The Carroll’s pyramid explains the important components of corporate social responsibility which involves the conduct of a business so that it is economically profitable, law abiding, ethical, and socially supportive. For an organization to be socially responsible means that profitability is the most important one where all other components rest. Obeying the laws and legal regulations is the next foremost condition when deliberating the firm’s ethics and the extent to which it supports the society by contributing to the disadvantaged. 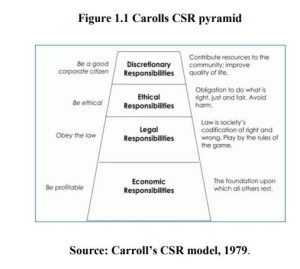 The four components constitute the different layers of the CSR pyramid that helps managers to understand the different types of obligations that the society expects of businesses.