The term “globalization” epitomizes the international system that is shaping most societies and the economies the world over today. It is a process through which, the interaction and integration of cultures, policies, business, and intellectual elements around the world is taking place, driven by the forces of technology, information, and finance, a full variety of views exist, some praising, some dispraising as to the value of globalization. However, we must believe in the ability to harness the good from globalization and avoid the bad which lies in the refinement of knowledge. 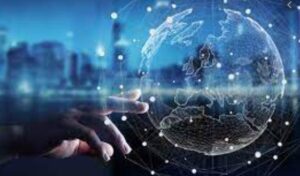 The term globalization refers to international integration. Globalization is a process through which the diverse world is unified into a single society.. The rapid industrial development, opening up of economies and the rapid progress of science and technology has reduced the world into a global village. However, economists have used the term globalization since the 1980s, but the concept became popular only in the latter half of the 1980s and ’90s. The formation of the General Agreement on Tariffs and Trade (GATT), the International Monetary Fund, and the concept of free trade have boosted globalization. The Globalisation ideology is based on the idea that more and more production and consumption of output alone is a substantial and major source of human happiness. Globalization denotes an economic process of integrating a country’s economy with the world economy, through free enterprise and free trade.

The failure of communism is one of the important political factors that led to globalization, with the disintegration of the USSR and USA as the superpowers and the subsequent economic crises in East European countries, and many other countries including India that were having trade relations with these countries were forced to look for new markets elsewhere as they suffered major economic losses. However, many business firms from the west rushed to these countries and established business relations.

The Maastricht Treaty for the economic and political integration of Europe got approved by European Community in 1993. The European market got integrated; firms there started rationalizing their operations. Relocation of factories to the low-cost countries in the union, and procurement of inputs from the lowest cost countries in the union or elsewhere in the world, and marketing of products throughout Europe gave companies a competitive advantage. European Community also imposed quota and other quality barriers on imports from non–European countries. The union insisted on ISO certification on all imports.

The reduction of tariffs and the inclusion of service and intellectual property and patent rights were done for the first time, under the Uruguay Accord of GATT in 1993 which changed the international economic scenario drastically. The international market with the reduction of tariffs has turned into a unified market with enormous competition among the business firms both local and international. The Uruguay Accord also led to the elimination of groups which had led to a big barrier to world trade. The trade groups imported and exported goods within the group which often led to a decline in international trade. In India various barriers to trade were removed in the form of removal of import restrictions, privatization of public sector undertakings, lowering of interest rate and soon. A strong effort was made by the Government of India to make the Indian economy competitive at the international level.

The rapid changes in the field of the communication system is the major factor that led to speedy globalization all over the world, the communication process has led to the widening of the markets, making the world market a small village. Lifestyles of people have changed especially in the developing countries through satellite communication by exposing them to new items. It has also helped these countries to find new markets for their products. Along with TV, computers, and telecommunications which created an awareness revolution and has influenced the buying behaviour of the consumer’s. Email, fax machines, cellular phones, etc. have ensured that ideas and product technologies go beyond national borders more rapidly. These developments have reduced the need for frequent business travels. Business deals are concluded much faster today than just a decade back. International travel and tourism led to exposure and demand for foreign goods. The visit to distant lands has become an easy affair; people utilize these travels for buying foreign brands.

Through better communication links and with new brands and products that are daily exposed in the markets, increase in income and media exposure, the consumers want the latest and the best available in the world market. Exposure through TV, the internet, and other media is developing a new motivation for the consumers. In order to satisfy the needs of this new world consumer, one needs a global product brand leading for global strategies.

Benefits and Disadvantages of Globalisation:

The globalization process has brought both good as well as evil, now let us analyze the benefits and detriments of globalization in detail.

The adverse impact of globalization

Types and importance of employee engagement

Difference between SHRM and Traditional HRM